You are here: Home / Reviews and Buying Guides / SilentStepStick clones and things to look out for.

SilentStepStick clones are often talked about in forums and groups as a great solution (and they can be!), but I just became aware of an issue that I wanted to warn everyone about …

Recently on a build of a Biqu printer I noticed some strange movements happening and no matter what I did to tune the stepper drivers things just progressively got worse no matter what I did. The  movement started crashing the hot end to the bed or into a print. I was extremely frustrated. Then my printer stopped working…

On the Facebook Biqu forum I noticed that others were having the same issue. It was brought up that the symptoms seem to be that of a overheating stepper driver. In this build they have two powerful fans blowing over the drivers so I found this some what perplexing.

Yes the board was below the heated bed but in my other Kossel printers this is not a issue. In fact on my kossel mini it has no fan and has been running for 5 years straight with no issues. Non! I then figured I wanted this printer to run so I took some other driver boards I had on hand and installed them (these are non silent step sticks FYI I am not sure that should make a difference or not but its worth mentioning).

So what could be the issue causing the drivers to fail?

I am going to step back and get you to have a look at this video Honest update: The finished version of the SilentStepstick 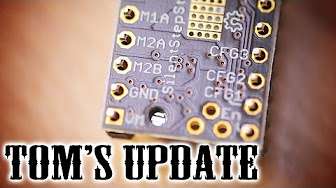 The video shows you how the chip should look and work and why if you have the chip on the underside. Specifically at this point in the video:

Thank you Thomas for this video! He is one of the best YouTubers on 3D printing I know of. Go subscribe to him here

I took one of the broken drivers and started taking it apart and first thing I did was remove the heat sink. A HA! The thermal transfer pad for the chip had been painted over. This effectively insulates the chip from the heat sink and makes is so it cannot cool down. Thus overheating and failing. Bad Bad Bad….