You are here: Home / Hacks, Tips, and Tutorials / 5 Ways to Bond and Glue 3D Printed Parts

Finishing 3D prints is as important to getting a good final 3D print as dialling the printer in. One way to get a good outcome is to create your print in multi-part assemblies, but how do you combine them to get a 3d printing result you can be proud of? 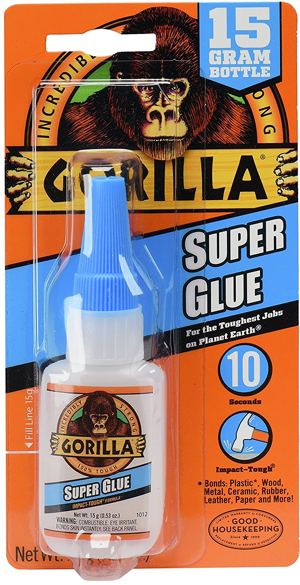 Glue is the default go-to for joining 3D printed parts, be that Super Glue, Gorilla Glue, or two part epoxy, but while that is a common and flexible choice, it’s not the only one, and can be pricey in comparison to some other options …

Rather than adding glue, you can bond parts through, essentially, chemically melting it (given due care and ventilation, etc).

Why is that important? Well, with solvent, what is left is just the plastic – nothing added. Also, being a watery liquid, it can drip, seep and draw into places other methods can not reach.

Most people know that ABS can be solvent welded with Acetone, which is commonly found at hardware stores in bulk, or drug stores (sold as nail polish remover – just get the pure stuff). What I was surprised to learn is some PLA can solvent weld with it too!

Make sure you use a natural brush rather than one with plastic bristles for obvious reasons!

HIPS can be dissolved by limonene, but you can also use Polystyrene modelling solvent, just like when you build model airplanes!

Another advantage to solvent is, in addition to brushing it on neat, you can make a slurry to fill larger gaps by dissolving some filament for a while to make a thicker consistency.

As well as solvent melting, you can also, obviously, use heat. Usually melting filament comes from the extruder or leaving your part in a hot car, but a soldering iron or even hot air gun can be employed. Heat melting is likely my least favourite technique.

If you have a Dremel-like tool then you can insert some filament into the collet where the drill bit would usually go, then get it up to speed while applying light pressure against where you want to join. Experiment with speeds to get the sweet spot, and it can work very well, with strong joints.

I have written about my bonding experiments with 3D pens before, and since then I have only gotten to like the technique more. This is probably my favourite technique because it doesn’t involve solvents, doesn’t deform the print, and allows you to colour match!

What is your favourite bonding technique? Let us know in the Facebook group!