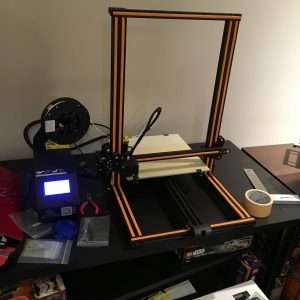 The name will either mean nothing to you, or you will have a mixture of impressions from the 3d printing community.

Creality is certainly a weird name, but one that has people talking. So what is this CR-10? And, more importantly, why would you be interested?

I should preface all this by saying it was a tweet by Preston that alerted me to the CR-10.

That got my attention because I have need of printing some big stuff and I have already spent too much on my 3D printing. If this printer worked I was willing to stretch the budget that bit further and take the familial retribution it would incur 😉

As mentioned earlier, it’s a large format printer. There are a few models, I bought the cheapest:

The printer itself has been well-received, but there have been a few issues, or some confusion at least, with resellers. You can’t actually buy from the manufacturer yourself, you have to purchase through third parties, and some customers have found issues with delivery costs being added after purchase, or delays.

Hopefully most of those are resolved now, but it’s worth checking with the facebook communities (yeah, there are two, not sure why) to see what the latest status is on those.

This printer can be found at steep discounts using codes that are shared in social media, making it as low as $400. An incredible price for such a capable printer, if you are willing to take the risk!

Breaking: Buy from Gearbest for a large discount!

Holding my breath I opened the box and set it up. Fortunately, I was super impressed by the unboxing and first print experience. Seriously impressed.

When I say it is mostly pre-built, really there are just a few screws and cables to very simply attach. Literally minutes of work to be up and running printing the included cat test print.

I paid $539.99 USD ($749.90 CAD) including delivery for this printer on 11th March. I ordered from Tiny Machines rather than one of the cheaper Chinese resellers, intentionally. If you are based in the USA, Chris from Tiny Machines does a lot of customer care before you get your machine, of course being based in Canada I don’t get any of that, but after the terrible experience with the the Aussie machine, I paid a bit extra knowing there was a chance I needed someone in my corner to help with support issues, as worked out well with my Wanhao buying via Digitmakers.

It arrived from China on March 20th, and the only delay getting it set up and running was because I had to work!

Unlike some printers I could mention, the printer came with plenty of stuff, lots of tools, usable spool of good quality PLA filament, roll of masking tape for bed adhesion, instructions, SD card and USB card reader, spare PTFE tube … seriously, you get more with this printer than any I have seen. They really went all out.

The CR-10 test print came out pristine on the first try. Seeing that made me feel confident this was going to be a good machine.

Even though the glass that came with the printer was absolutely fine (and made the bed actually 310mm x 310mm) and level, I ordered a Zebra plate, knowing I will be printing large items that are stubborn to remove. Believe me, that is not a cheap option, and absolutely not necessary. The plate gave me my first issue, levelling that bad boy.

Manually levelling when you have a flat surface is a breeze on the machine, you don’t need a level compensation sensor, but using clips AND silicon heat pads, I only got the level “ok”, I still need to work on that.

I am loving this printer. Other than some issues dialling in retraction settings, and levelling my Zebra Plate, it has been absolutely trouble-free, and the results are excellent.

This printer beats all my expectations, so far at least. The past couple of weeks I have put it through its paces and it has delivered every time. My next job will be to put it up against my other larger printers, the Wombot XL and the TEVO Black Widow, and see which comes out best …

Buy from Gearbest to get the printer at a discount!

NB. This website uses affiliate links, so if you make a purchase after clicking we might get a couple of dollars in return. The amount you pay, and our opinions, are not affected by this, and any commission goes to help keep the site running.

Get it now before full release and you can choose your own fair price!

Understand 3d Printing, How 3d Printers Work, Trouble Shooting, Both With Video and Ebook Downloads, Plus the Opportunity to Ask Questions Live

Get fresh makes, hacks, news, tips and tutorials directly to your inbox, plus access to the next online training!

Get fresh makes, hacks, news, tips and tutorials directly to your inbox, plus access to the next online training!